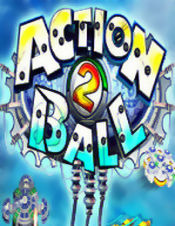 The all-new Action Ball 2 is a no-holds barred arcade game that blends the hottest brick-busting action you've ever seen with the thrilling battles of space shooters. As you use one of four selectable paddles to hit one or more balls toward eye-dazzling arrays of destructible objects, you'll also have to battle four new robots that are out to foil your efforts. One of the robots repairs destroyed bricks while another fires missiles at your paddle!

Action Ball 2 comes with more than 30 bonuses to capture and use, although not all of them are helpful. You can also apply four upgrades to your paddle, making you an unstoppable force as you battle your way to the final showdown. You'll also enjoy the improved level design, which is more clever this time through and features challenges not seen in other Breakout hits. So download Action Ball 2 today. We believe you'll find it's one of the most addictive games you've ever played!